The KA-BAR/Becker Companion knife is an excellent choice for any knife enthusiast. It’s a high quality, truly dependable, wilderness survival utility knife. It will do an excellent job of performing various wilderness survival tasks. It can also withstand severe abuse due to its superior construction. The 1095 Chrome-Vanadium steel is excellent blade steel as it’s very tough.

There are many different options that you’ll have when adding a fixed blade knife to your collection. Few can withstand the abuse that the BK2 can. Few are also cut out for all the utilities that the BK2 can be utilized for. The BK2 can be used as a chopping tool, standard knife, amongst a host of other things. 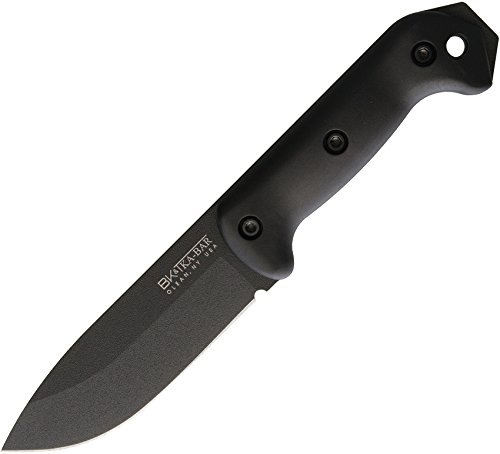 For a budget-friendly price, this American made knife is a no-brainer to add to any collection. Below we will dive in and look at KA-BAR’s history, as well as the knife ergonomics and construction. Let’s jump in!

It was actually a rather dangerous decision for an English knifemaker at that time to decide to leave his guild. Opening shop on your own was dangerous since the various knifemaker’s guilds were very difficult. They were known to threaten the health and well-being of both family and friends if you left once joined. Knife manufacturing in America during the same period was mostly limited to local blacksmiths. They typically forged kitchen and butcher knives, meaning there was significant demand for high-quality cutlery imported from England.

At one point, 38 English knifemakers banded together and decided to leave their guilds. They decided to immigrate to America where they settled in the Commonwealth of Pennsylvania. At this point, they formed a limited partnership in which they named the Tridioute Cutlery Company. The intention was to manufacture and sell high-quality cutlery on the American market. This limited partnership is widely considered to be the origins of the present-day KA-BAR Knives, Inc.

In the early 1900s, a western fur trapper whose name is lost to history encountered a bear. The bear was not happy with the trapper’s intrusion into his territory and attacked the trapper. But, after firing the first shot at the bear with his rifle in self-defense, the trapper’s rifle jammed. This left him with no other weapon than his trusty Bowie Knife to defend himself with.

KA-BAR actually came about as the result of the letter that the trapper sent to the Tridioute Cutlery Company. He wanted to thank them for manufacturing the knife that had saved his life. But, due to the lack of literacy in America at that time combined with the trapper had illegible handwriting. All that was truly legible in the letter was the phrase “KA-BAR”. To honor the unknown trapper’s testimony, the various members of the Tridioute Cutlery Company decided to change the name of their company to KA-BAR.

Because of this, KA-BAR is one of the oldest American knife manufacturers still in business today. KA-BAR manufactures more than 100 high-quality cutlery products and accessories. They are sold through various distributors to many different independent retailers. They are also sold via mail order catalogs as well as through their online store.

KA-BAR manufactures their own knife designs such as their iconic United States Marine Corp Fighting and Utility Knife. But, they also partner with various other knife designers such as Ethan Becker of Becker Knife & Tool. As a result, they’ve produced licensed versions of their knives.

This includes the KA-BAR/Becker Knife & Tool “Companion”, which is also known as the BK2. This knife is a modern utility knife that endeavors to carry on KA-BAR’s tradition of producing quality cutlery.

Thus, the KA-BAR/Becker Companion is a fixed blade knife that features an overall length of 10.5 inches. It has a 5.25-inch drop point blade design and a 0.25-inch spine.  It’s made from 1095 Chrome/Vanadium plain tool steel with a Rockwell Hardness of 56-58 HRC.

The blade of the BK2 features a flat saber grind to provide superior edge geometry combined with a black, epoxy, powder coat. This helps prevent corrosion of the non-stainless blade steel. Plus, the KA-BAR/Becker Companion also features full tang construction. It’s combined with Ethan Becker’s trademark, ergonomic, handle design which is made from Ultramid. Ultramid is a high strength, impact, and abrasion-resistant, thermoplastic polyamide manufactured by BASF.

This leaves a small section of the tang exposed on the pommel. That area is commonly referred to as a “glass breaker” but can serve several different purposes. Last, the KA-BAR/Becker Companion knife is supplied with a heavy-duty, molded, Kydex sheath which is MOLLE compatible.

This knife is classified as Plain Tool Steel and thus, despite its Chromium content, it is still considered to be non-stainless knife steel. The BK2 is made of 1095 Cro-Van steel, which is comprised of the following materials:

1095 Cro-Van is not considered stainless steel. It is nonetheless an excellent choice of blade steels for dedicated wilderness survival knives. It’s very tough and, it does and a very good job of taking and holding a very fine edge. But, due to the fact the steel is not stainless steel, it does require either extra care or, a corrosion-resistant coating, to keep the blade rust free.

Plus, due to the iconic Becker handle design, the BK2 is also a very comfortable knife to hold in the hand as well as a joy to use and, the ergonomically designed Utramid handle scales are nearly indestructible.

Consequently, not only is the KA-BAR/Becker Companion knife an aesthetically pleasing wilderness survival tool, but it is also imminently well suited for its intended purpose due to its superior design and construction. Thus, the KA-BAR/Becker Companion knife a serious survival tool that is capable of taking on any task that you may require it to perform in a wilderness survival situation.

The KA-BAR BK2 fixed blade survival knife is an excellent option for any outdoor enthusiast. With a budget-friendly price point and high-quality durable steel, it doesn’t make sense NOT to own one. We would consistently rank the BK2 at the top of just about any survival knife list. There are few others that can handle the sheer amount of tasks that this little blade can while carrying a “Made in the USA” stamp. It’s one of the few items we will always keep in our range bag.